Driving A Car vs Flying A Plane….. Which Is More Difficult?

Posted on June 1, 2015 by Christine Vanderberg

It’s a known fact in our family that I am the better driver. My husband won’t admit it, but the kids will. They’ve been on enough car rides through the years when their lives were spared in the nick of time by my shouting: STOP! or LOOK OUT!!

“When? You were speeding up when everyone else was slowing down!”

“I would have slowed down – eventually. You didn’t give me a chance.”

There are no second chances. That’s my motto, when sitting in the passenger seat with my husband at the wheel. Shout first; question his intentions later.

My mother will vouch for me. She was riding with us, sitting in the back seat, while my husband was driving home from a recent trip to Connecticut. He passed over the yellow line into the adjacent lane, then slid back into our lane…once… twice…The third time I turned to look at him. 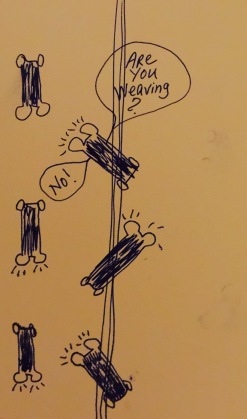 “Are you falling asleep?” I asked.

From the back seat, my mother tapped me hard on the shoulder to affirm my observations.

“Pull over at the next rest stop,” I told him. “I need to use the bathroom.”

Between bathroom stalls, my mother and I discussed the situation.

“Do you think he was weaving?” I asked her.

“Yes! Definitely. I think he drank too much at the party.”

“I think he was falling asleep. Either way, I’ll have to take over the driving.”

It’s too bad she didn’t get a chance that night to experience the thrill of one of my husband’s more creative maneuvers. I’ve named it “The Nick of Time Exit,” and it happens when we are in the left lane (we’re always in the left lane), and I hear these words: Oh, S*#t! Is that our exit?! I almost missed it!

I know what’s coming so I start praying in my head…Hail Mary, full of grace. The Lord is with thee…. With arms folded across my chest, I brace myself by leaning against the door; every muscle in my body is on high alert. Holy Mary, Mother of God…It feels like we are gliding on ice as he slides across two lanes. It happens so quickly, there isn’t enough time to finish the prayer.

I know we are in the clear and safely on the exit ramp when I hear the trail of honking horns left behind in our wake. I uncover my eyes and take deep calming breaths, wiping the sweat from my brow.

“What’s the matter with you?” he asks. “Do you feel alright?”

“You almost got us killed!” I gasp.

“What are you talking about? I had plenty of time.”

There are other racecar driver type maneuvers like the two wheelie illegal U-turns at 35 mph across two lanes of oncoming traffic.

“Weee!” my mother laughed one day as she slid across the back seat while my husband was driving. “It’s a Marlon Brando U-Turn!”

From the back seat it may have felt like a thrilling roller coaster ride, because she couldn’t see the headlights of the oncoming traffic bearing down on us. In the front passenger seat I felt my bowels loosening as I kissed the face of death.

“Can’t you just go a few more feet and make a U-Turn at the traffic light?!” I shouted.

“You just made an illegal U-Turn and almost got us killed!”

“I had plenty of time. Besides, your mother enjoyed it.”

Then there are the lane changes on the parkway without the use of his directional blinkers. How am I supposed to check the blind spots if I don’t know he’s going to change lanes? He’s not checking them; someone has to do it.

Forget about sleeping or reading books in the car when my husband is driving. I never felt safe doing that. I remember trying to sleep with one eye open on our way home from a long trip one night. I have to be totally wasted drunk to sleep in the car when he’s driving – and that only happened once in our 39 years of marriage.

But that’s all about to change now that the car industry has finally put some remarkable safety features in the new cars. While shopping for one this week I was thrilled to see that the two cars we were considering – the Honda Accord and the Subaru Legacy – both had cameras that give forward collision warnings, distance regulation in cruise control mode (prevents you from tailgating), and visual and audible lane departure warning signals. The Honda has a tiny camera in the passenger side mirror that gives a visual display of the right side blind spot. In cruise control, the Subaru will actually stop by itself if it senses an imminent impact with the vehicle in front of you.

Imagine that! No more screaming Stop! Look Out! Watch It! No more jamming my foot down on an invisible passenger side brake. No more craning my neck to check blind spots. No more arguments, loosened bowels, sweating foreheads, muscle tension, white knuckle gripping of the seat, squeezing the door handle or grabbing the hand bar at the top of the roof. Some people hang their dry cleaning on that bar. I use it to control the centrifugal force pulling me into the gear shaft during those “Marlon Brando U-Turns” my mother is so fond of.

There are other problems with the new cars, however. It’s no wonder they’ve included so many safety features to prevent a collision, because the probability of having an accident in one them might be greater than having an accident in an old 1969 Chevy with no seatbelts or air bags installed.

The audio touch-screen display is the reason. It has many different media programs and options galore to play with to get your music sound just the way you like it. It’s a big distraction with all the pop up settings, and I’m afraid the blinking lights and beeping sounds installed as driving safety features will be going off every time my technology challenged husband tries to change the radio station. What if he presses the wrong buttons and calls someone in Russia by mistake?

There is a feature in the media center called Aha. I don’t know what the hell that is and I probably never will, because, by the time I figure out how to program the radio, our 3- year lease will be up. The manual says it can keep me connected with cloud-based access to news, information and social media updates like Facebook.

Well that’s just great. As if talking on the phone while driving wasn’t distracting enough. Now people will be checking Facebook and other cloud-based media. You can also plug in your i-pad to check your e-mail and set the welcome screen with personal photos to coo over while you’re driving.

If your head is in the cloud checking your e-mail or Facebook page, you’re going to be oblivious to the blinking lights and beeping sounds installed as safety features to warn you that you’re about to collide with some little old lady sitting at a traffic light in her new car – with all the same safety features you have– none of which will be able to warn her that you are about to ram into her rear end.

I remember taking a driver-ed class in my 1969 junior year of high school. We weren’t even allowed to turn on the AM radio in the car, because the driving instructor thought it was too distracting to listen to music while driving.

Seems like you would need a computer car-tech class today just to learn how to work the media panel in my new car. If you can master that and drive the car at the same time, hell, flying a plane through the real clouds would be a breeze.

Christine Vanderberg is a humorist who lives on the South Shore of Long Island. Visit me at my blogsite: christinevanderberg.com
View all posts by Christine Vanderberg →
This entry was posted in Uncategorized and tagged driving, Honda Accord, Humor, Marlon Brando U-Turn, New Cars, Safety Features in New Cars, Subaru Legacy. Bookmark the permalink.

4 Responses to Driving A Car vs Flying A Plane….. Which Is More Difficult?

Laughing With Buddha
Painting with Words

A Comic about Work, and Smoking and Lunch.

The Life of a Teenage-Traveler

Taking the journey, bumps and all

The latest news on WordPress.com and the WordPress community.

Life in the Boomer Lane

wabi sabi ~~~ poems and images
seaofimage.wordpress.com/
Take Off Your Sandals

words and images on holy ground

The Art and Craft of Blogging