Posted on April 27, 2015 by Christine Vanderberg

The granddaddy of all disappointments, for me, began at my conception, when two X chromosomes hooked up and determined my sex. If I had any control over the matter, I would have urged that egg to hold out until a sperm carrying a Y chromosome came swimming by, thus creating a Christopher, instead of Christine.

By the time I was born, in 1952, society had already drawn up my life’s trajectory. It wouldn’t matter if I developed a mind like Clarence Darrow, an imagination like Albert Einstein or the talent of Vincent Van Gogh, because I had those damned XX chromosomes.

Growing up in the 1950s, there weren’t many career choices for little girls to dream about. It was assumed that every little girl’s single most important goal in life was to become someone’s wife and mother. Girls were rarely asked, “What do you want to be when you grow up?” And if your answer was anything other than the predictable career choices of nurse, teacher, secretary or airline stewardess, people looked at you with their heads cocked sideways– like a dog that doesn’t understand what you’re saying.

There weren’t many female mentors, or trail blazers to follow, for a little girl growing up with the foresight or the drive to be a doctor, a lawyer or an astronaut. And no little girl in the 1950’s would ever have imagined saying, “I want to be President someday.” Only boys could make those audacious statements and be praised for their high ambition.

More important than career choice, is the inherent freedom that boys are born with – to go anywhere and do anything without the burden of fear that is instilled in a little girl’s mind – that we can get hurt in ways that boys can’t.

Don’t drive alone at night; Don’t walk alone in the streets at night; Make sure someone walks you to the car if you have to work late; Don’t get off the subway alone in that neighborhood; Don’t go (on that road trip, traveling through Asia, to the mall, anywhere) by yourself; You’re asking for trouble if you wear that outfit in public.

So many warnings and restrictions accompanied me through my life that I sometimes feel I’ve lost opportunities for adventure, exploration and personal growth that I wouldn’t have had to give up if I was born with a set of XY chromosomes.

Even the Catholic Church had it in for us girls. Back in the 1950’s, altar servers were called “Altar Boys” for a reason. When I was preparing for First Holy Communion, at the young age of seven, I asked a nun why girls couldn’t be altar boys. She said, “Girls are not allowed to step on the altar because girls are impure.”

I didn’t know what “impure” meant until I was given that little pamphlet, Growing Up And Liking It. It should have been called Growing Up – Whether You Like It Or Not, for therein were the cold hard facts about the phenomenon of menstruation – the gentle sloughing off of uterine cells that occurs monthly, and is a precursor to the joys of becoming a woman. Soon your body will be changing – becoming more womanly, the booklet said.

It sounded like such an adventure, a passage into unknown lands – womanhood! I thought I was going to shed my twelve-year-old body overnight, like a cicada, leaving behind an empty shell of my formless shape, and emerging with a body like Marilyn Monroe. 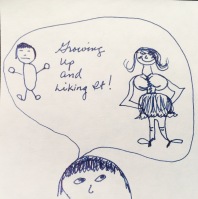 Well, there was nothing gentle at all about the entire process. After one day of agonizing cramps that made me curl up in bed, writhing like a caterpillar who’s been poked with a stick, I cursed the day those XX chromosomes united. I had no interest in becoming a woman, and would have made a deal with the devil to change places with the ugliest, dorkiest, overweight, unpopular boy in school just so I wouldn’t have to go through another month of the joys of becoming a woman.

For those of you who say only women can have the sanctified powerful life-giving miraculous experience of pregnancy, childbirth and motherhood, I agree. But for nine months I watched my body transform from a pretty, toned, size 5, happy young woman, into a cranky shrew distorted into the shape of a hideous unrecognizable leviathan.

And when it came time to deliver my little miracle, I would much rather have switched places with my husband and have him lying on that table, so that I could be the cheerleader standing behind his head shouting, “Come on, honey! Push! You can do it!”

God wasn’t kidding when he said to Eve, “I will greatly multiply your pain in childbirth, in pain you will bring forth children; yet your desire will be for your husband, and he will rule over you.” The pain was bad enough. Did he have to throw in that zinger at the end?? Proof that God had it in for us women from the start.

The Orthodox Jews have a morning prayer that translates: Blessed are you Lord…for not making me a woman.

I much prefer what the queen had to say about the matter.

Christine Vanderberg is a humorist who lives on the South Shore of Long Island. Visit me at my blogsite: christinevanderberg.com
View all posts by Christine Vanderberg →
This entry was posted in Uncategorized and tagged Growing Up And Liking It, Humor, Orthodox Jewish morning prayer, Womanhood, XX Chromosomes. Bookmark the permalink.

Laughing With Buddha
The Shop

A Comic about Work, and Smoking and Lunch.

The Life of a Teenage-Traveler

Taking the journey, bumps and all

The latest news on WordPress.com and the WordPress community.

Life in the Boomer Lane

wabi sabi ~~~ poems and images
seaofimage.wordpress.com/
Take Off Your Sandals

words and images on holy ground

The Art and Craft of Blogging